What’s Going on in a Child’s Mind?

What’s Going on in a Child’s Mind?

Will your child understand that because Mary was not looking while Sarah changed the rock’s location, Mary will incorrectly believe that the rock is underneath the blue cup? If so, then congratulations– your child has developed theory of mind! If not, do not worry; most children do not develop theory of mind until they reach the ages of 4 and 5 [9]. At this point, you are probably wondering this: what exactly is theory of mind, and how does this theory relate to my child’s growth and development?

The first experiment to support the existence of theory of mind was conducted by Wimmer and Perner in 1983, and the framework of the experiment they used– now called the false-belief test– was similar to the hypothetical scenario that I described above. Theory of mind is the ability for individuals to understand that others may possess mental states (such as beliefs, intents, and perspectives) that vastly differ from their own. This lends to an individual’s ability to decipher another person’s thoughts, feelings, and intents, which will then contribute to his/her ability to successfully navigate social situations [9]. Thus, in reference to the hypothetical scenario described above, a child who has yet to develop theory of mind will mistakenly believe that Mary will know the rock’s correct location because he/she knows rock’s correct location. In other words, he/she will believe that Mary shares the same beliefs as him/her.

What are signs that your child is well on his/her way to developing theory of mind? Here is a list of behaviors your child should be exhibiting during infancy and childhood:

By the ages of 4 and 5, most children will be able to understand that different people have qualitatively different thoughts and feelings pertaining to the same thing. Additionally, they are able to comprehend that people can hold false beliefs, and others may not overtly display their emotions and instead choose to hide them [7]. The absence of these insights is called mind-blindness and is often associated with developmental delays or neurodevelopmental disabilities such as autism spectrum disorder [1].

Like many other developmental milestones, theory of mind is the result of a complex interaction between neurodevelopment and (social) environment [8]. Thus, parents can engage in activities to encourage the development of theory of mind. An example milestone that ensures that your child is on track for developing theory of mind is mentioned within our BabyNoggin app: grown-up pretend play, which should be reached between the ages of 29 and 31 months. Pretend play encourages children to take part in scenarios that exercise their ability to take on a mindset that is separate from their own. Check out our BabyNoggin app (link to download BabyNoggin app here) to gain access to fun developmental activities you can do with your child!

If you suspect that your child is not developing theory of mind at an appropriate age, please visit your local pediatrician in order to gain further insight into your child’s developmental trajectory.

Remember, early detection and intervention are key to mitigating the effects of developmental delay and reducing the need for costly interventions over time [4]. At BabyNoggin, we  have specially developed the BabyNoggin app in order to aid you in tracking your infant’s major milestones and detecting any developmental abnormalities, thus giving you the power of early detection in the palm of your hands!

[1] Baron-Cohen, S. (1995). Mindblindness: An essay on autism and theory of mind. Cambridge, MA: The MIT Press/Bradford.

PreviousWhy Parent Empowerment is Key: A Story for Pediatricians and Providers
NextThe Economics of Developmental Screening and How Screening is Protecting Children’s Health 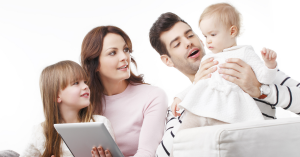 From Screenings to Better Outcomes

Interested in ​free assistance to improve your screening and referral rates?

Definitely
No Thanks
x